A custom made screwing module that is used in a robot cell to assemble products automatically.

A robot arm with gripper is used for assembling and testing products automatically.

Verborg engineering has a spacious well-equipped factory to produce parts and assemble machinery. 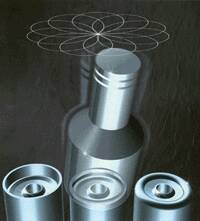 This is because, unlike impact or orbital forming, radial forming uniformly displaces material in three directions by kneading microscopic amounts of material radially outward, radially inward and tangentially overlapping.

The radial forming process was developed in Europe in the mid 1960s and since has been adapted for various applications.

Today the Radial process stands alone in its ability to configure assorted materials. Its versatility has established the Radial Forming process as the world-wide market leader.

Radial Forming is often confused with orbital forming but there are major differences between the two processes. Radial forming is unique. It displaces material uniformly at a constant speed in an eleven-sided rosette pattern (left) to ensure uniform and consistent material displacement. This results in higher joint strength and superior surface finish.

Orbital Forming doesn't result in universal material displacement, it displaces material at varying rates, when examined outward from a part's centre (right). The material displacement at the outside of the rivet is considerebly more than at the inside. This uneven rate of material flow leads to inconsistent flow patterns. The advantages of orbital forming, in comparison with Radial forming, are higher operating speed and lower investment costs.

Verborg Engineering has ample experience in both technologies; radial forming as well as orbital forming. These technologies has been applied in several special and universal purpose assembling machines.

Radial forming is highly versatile in its ability to form ferrous and non-ferrous metals, die cast materials and case-hardened fasteners. And because the machines can be set to precise pressures, it has been used successfully in conjunction with assemblies containing Bakelite, ceramics, glass, and other brittle materials. Radial forming facilitates riveting of precision parts, precious metals and various thermoplastics. You can also engrave, mark, coin and burnish surfaces.